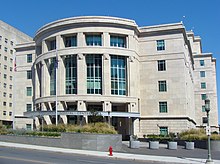 The Pennsylvania courts of common pleas are the state trial courts of general jurisdiction. There are 60 judicial districts, 53 of which comprise only one of Pennsylvania’s 67 counties, and seven comprising two counties. Each district has from one to 93 judges.

The courts of common pleas hear civil cases with an amount in controversy in excess of $7,000 and trials for serious crimes. They have original jurisdiction over all cases not exclusively assigned to another court and appellate jurisdiction over judgments from the minor courts. They also hear appeals from certain state government and most local government agencies.

The commonwealth consists of 67 counties. In every county except for Philadelphia County, there are magisterial district courts. These courts are inferior courts of limited jurisdiction. They handle landlord-tenant matters, small civil claims (cases involving amount in controversy up to $12,000), summary offenses, violations of municipal ordinances, and preliminary hearings and arraignments in greater misdemeanor and felony offenses pursuant to Pennsylvania’s Rules of Criminal Procedure which go on to be tried in the courts of common pleas. In some counties, such as Chester County, magisterial district courts may issue emergency protection from abuse orders when the Family Court Administration offices of the courts of common pleas are closed.

Magisterial district courts divide up their jurisdiction by geographical location. Most such districts include several municipalities. Larger cities and municipalities may be divided seven of which are located within the City of Allentown.

Magisterial district judges do not have to be lawyers; however, those who are not lawyers are required to complete a certification course prior to serving. The magisterial district courts are supervised by the president judge of the court of common pleas of that judicial district.

The Pittsburgh Municipal Court is an administrative judicial unit with the 5th Judicial District staffed by Allegheny County magisterial district judges, and has been assigned all matters within the jurisdiction of the Pittsburgh Magistrates Court, which has been established by statute.[3][4][5]

The Supreme Court justice with the longest continuous service on the court automatically becomes Chief Justice.

The Pennsylvania Supreme Court justices are elected to ten year terms. Supreme Court judicial candidates may run on party tickets. After the ten-year term expires, a statewide YES/NO vote for retention is conducted. Judges retained by the voters serve another ten-year term. If the judge is not retained, the Governor—subject to the approval of the State Senate—appoints a temporary replacement until a special election can be held.

Judicial candidates may now express political viewpoints as long as they do not “commit or appear to commit the candidate with respect to cases, controversies or issues that are likely to come before the court.”[9][10]

Justices must step down from the Supreme Court when they reach the age of 70, although they may continue to serve part-time as “senior justices” on panels of the Commonwealth’s lower appellate courts until they reach 78, the age of mandatory retirement.[11]

All persons have an unlimited right of appeal from the minor courts (magisterial district courts and Philadelphia Municipal Court) to the courts of common pleas. This is not an appeal in a traditional sense (meaning a party contests the legality of a specific action or entry of evidence), rather the party formally seeks a trial de novo (new trial). In this scheme the findings of the lower court are vacated in the entirety and a new trial is held by a Court of Common Pleas.